Martial arts instructor, 25, lost half her SKULL after sinus infection spread to her brain

A martial arts instructor in the US has been left with half a skull after a sinus infection spread to around her brain.

Natasha Gunther claimed she was forced to have surgery to remove 5.5inches of bone (14cm) to stop a mass pressing against her brain.

The 25-year-old is now urging people not to write off their symptoms as just a mild infection, and to see a specialist if they do not get better.

Ms Gunther’s ordeal began in late 2021 when she wrote off her stuffy nose and blocked sinuses as just another infection.

The judo black belt was used to regularly catching coughs and colds from working with children, who she teaches martial arts classes in California.

But she grew concerned when her condition did not improve despite being given antibiotics from her doctor.

By December Ms Gunther was vomiting and suffering migraines, which prompted her family to pressure her to get a brain scan.

It revealed a mass inside her skull, which forced doctors to cut out part of the bone on the right side of her head to relieve pressure on the brain.

She claimed doctors told her she would be dead in a week without the surgery. 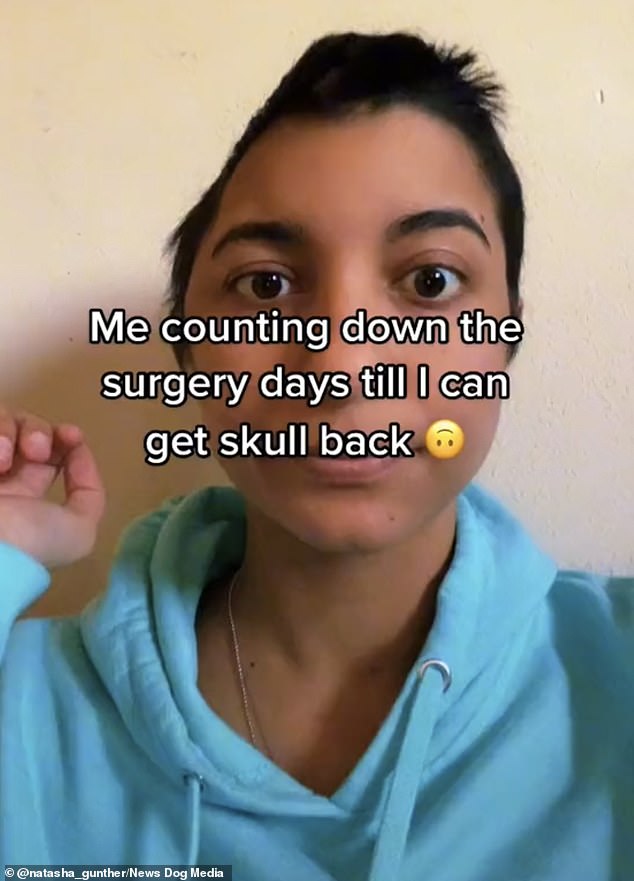 When she caught her sixth sinus infection in a year in late 2021 she thought nothing of it and got antibiotics to clear it. But it only got worse. When she went for scans, doctors discovered it had spread into her head. A section of her skull was removed (pictured after surgery) likely to relieve pressure on the brain which can be fatal 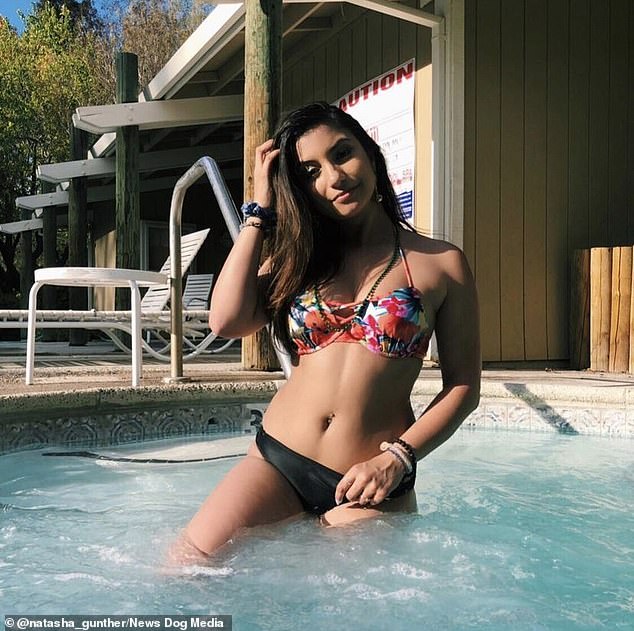 Natasha Gunther, 25 (pictured before the operation), was used to regularly catching coughs and colds from working with children 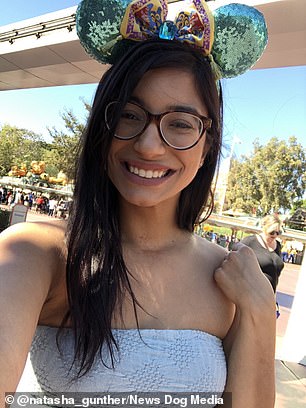 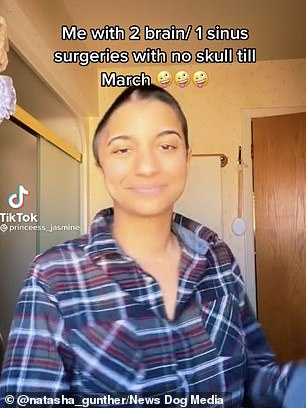 The removed 14cm (5.5inch) area of her skull is now in a freezer, and doctors are planning to try and put it back in next month. If this fails, they will insert a 3D-printed piece of metal to replace the bone

Ms Gunther, who must now wear a helmet to protect her brain, remained in hospital for five weeks after surgery and had to learn how to speak again.

She will not be able to do some martial arts moves such as grappling — where you grip or seize your opponent — ever again.

The removed bone is being stored in a freezer, and Ms Gunther hopes to have an operation to refit it to her skull next month.

What is a sinus infection? What are the treatments?

A sinus infection is when the small air sacs in bones around the nose become infected.

It is usually triggered by a virus, but can in some cases be due to a bacteria.

Symptoms include pain, swelling and tenderness around the cheeks, a blocked nose and a high temperature.

They normally clear up on their own in about two to three weeks.

In more serious cases where someone is not getting better doctors may prescribe antibiotics to help clear the infection.

In rare cases, it can spread into the soft tissue around the eye, bones in the face and into or around the brain — leaving someone needing urgent medical care.

Sinusitis is normally triggered by a viral infection in the lining of the sinuses, which are small gaps between bones around the nose area.

It usually clears up on its own within two weeks, but if symptoms do not improve doctors may prescribe antibiotics to help clear the infection.

In rare cases, it can spread into the soft tissue around the eye, bones in the face and into or around the brain.

Ms Gunther posted about her infection on the social media platform TikTok alongside pictures showing herself before and after surgery.

She revealed that she came down with her ‘fifth or sixth’ sinus infection late in 2021.

Scans on December 12 revealed that the infection had spread to her brain.

That same evening doctors rushed her for a craniotomy — where a small area of the skull is removed and replaced so that doctors can check the infected area.

But she was then booked in for a full craniectomy on December 23 to have the right side of her skull removed.

This may be done to relieve pressure on the brain, which can press it onto the stem leading to permanent damage or death, or to remove pus-filled abscesses that build up due to infection.

Ms Gunther said: ‘I usually suffered from one sinus infection per year but last year, I got more that that.

‘As most people who get sinus infections will know, you don’t think anything of them and neither did my usual doctor. I teach martial arts to kids so I’m used to getting colds.

‘Surgeons told me I would have been dead within a week if I hadn’t gone to the hospital when I did.

‘If you have more than one sinus infection per year or even just a sinus infection, please go to the hospital or the ENT [Ear, Nose and Throat Clinic in the USA] just to be safe. 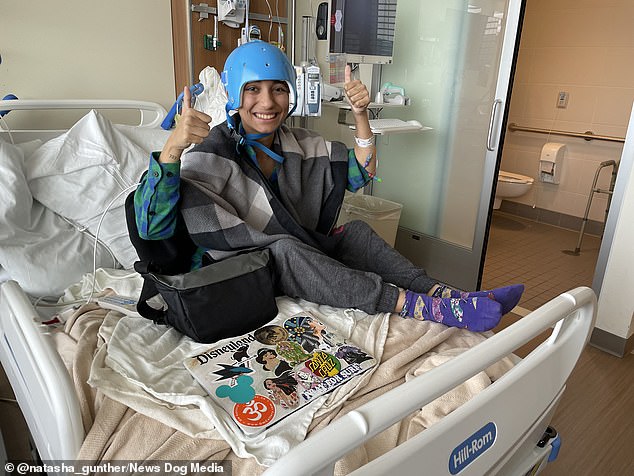 Ms Gunther must now wear a helmet to protect her brain as part of the skull is missing. She has an operation next month to reinsert it 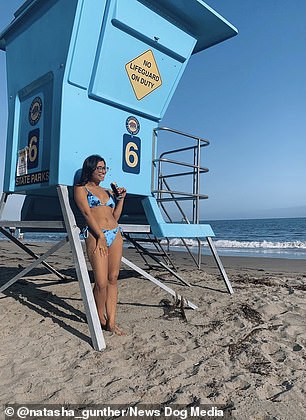 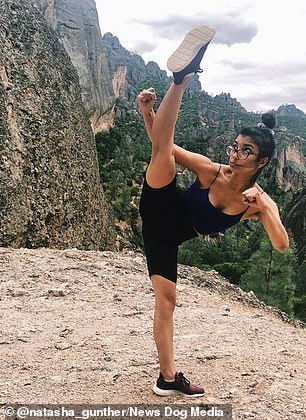 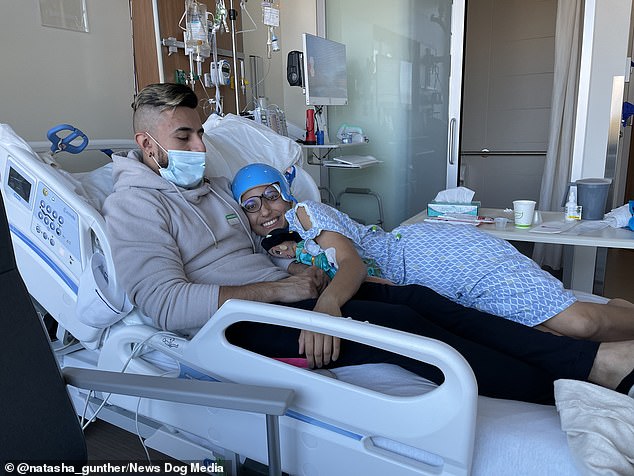 ‘Please just don’t rely on your primary doctor [GP in the UK] because it could be serious.’

Speaking about her life after the surgery, Ms Gunther said: ‘My life is very different to what it used to be.

‘I used to have a busy life teaching martial arts and hanging out friends every day — like any person in their twenties.

‘When I came out of surgery, I struggled to talk so I’ve been having regular speech therapy since then.

‘My boyfriend Joao — who is also a martial arts instructor — has been doing a lot psychical therapy so I can get my energy back in my body.

‘But there are some martial arts moves like grappling that will be too risky for me to every do again.’

When Stalin Starved Ukraine: The Genocide That Russia Has Tried to Cover Up for Decades

When Stalin Starved Ukraine: The Genocide That Russia Has Tried to Cover Up for Decades