Brilliant Cristiano Ronaldo scored his 50th career hat-trick to get Manchester United out of another massive hole.

A week after bringing shame on the club by smashing the phone of a young Everton fan, Ronaldo was his side’s knight in shining armour on a day of protest at Old Trafford.

The Portuguese superstar rattled in the game’s first couple of goals inside the opening 32 minutes and after United allowed the Premier League’s bottom club to fight back to 2-2, he thundered in a winning free-kick from 25 yards. 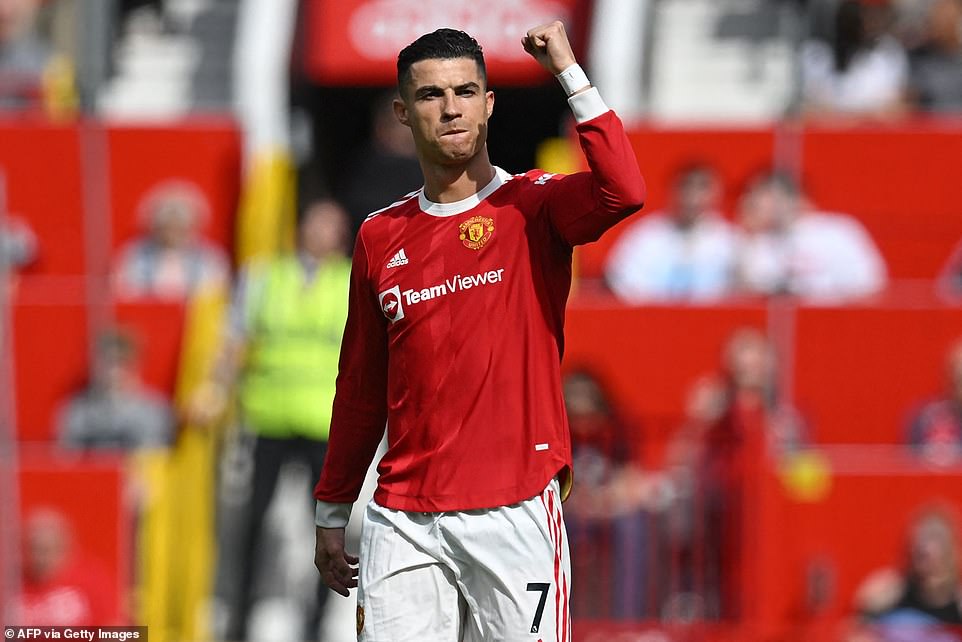 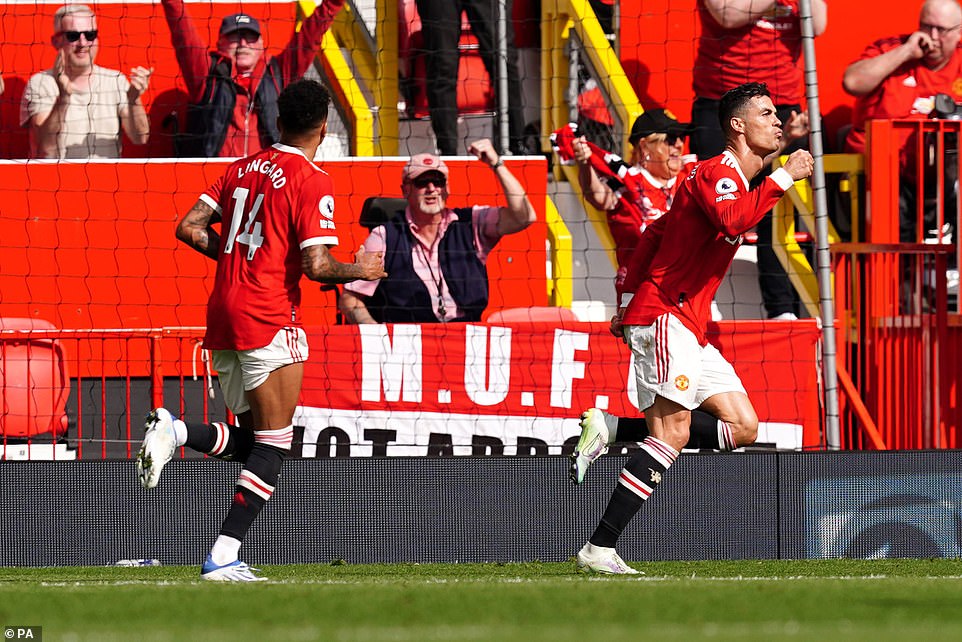 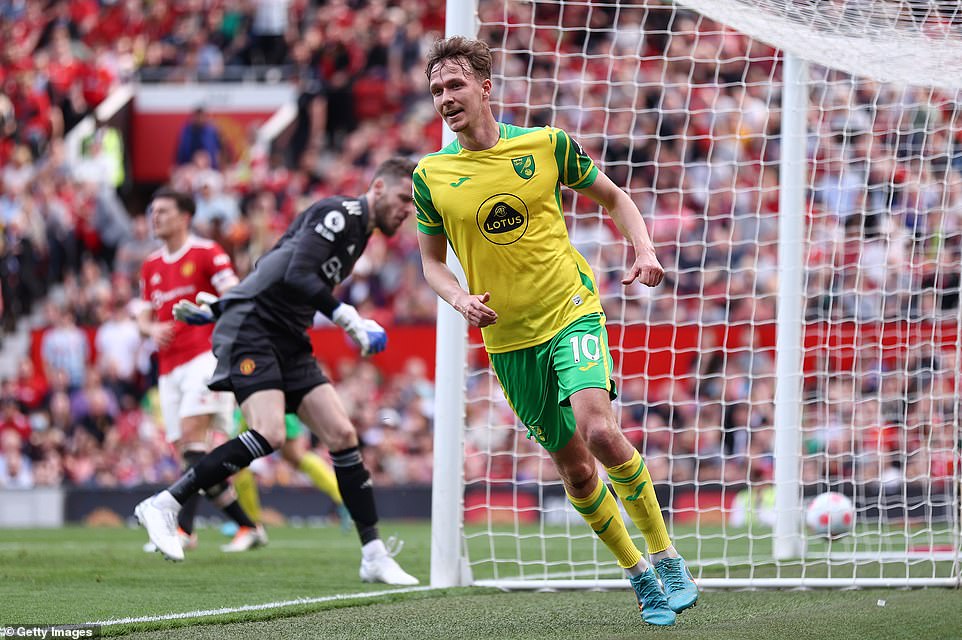 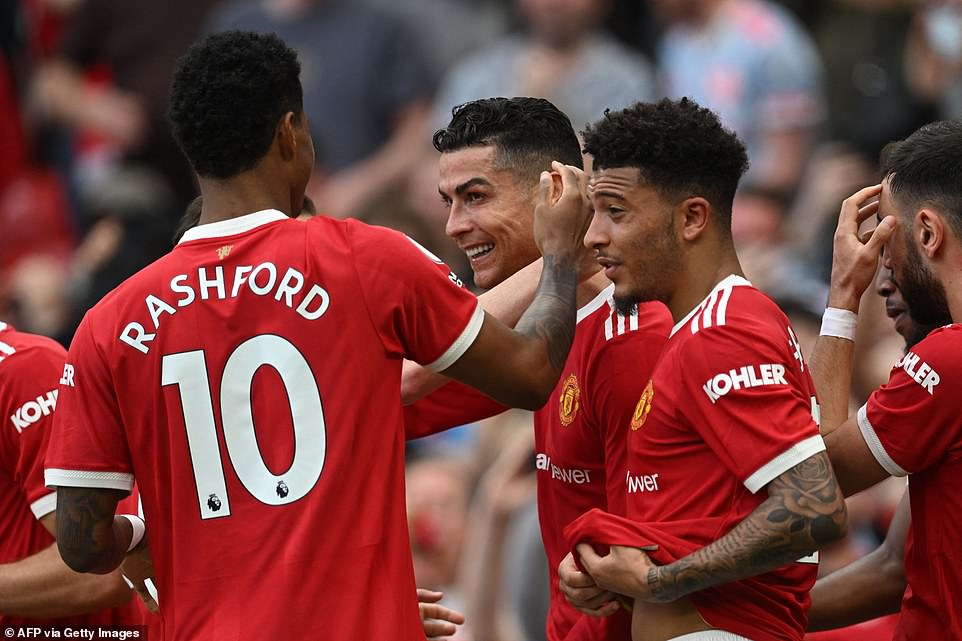 In a dreadful season for United, the 37-year-old has still managed 21 goals. Fifteen have come in the Premier League with only Mo Salah and Son Heung-Min scoring more.

It gave United’s fans something to cheer about as they closed the gap on a top-four place to three points but there were also loud dissenting protests against The Glazer ownership, both inside and outside the stadium.

‘We know we aren’t playing very well but we got three points,’ said goalkeeper David de Gea, who had labelled his side a disgrace in losing to Everton on the previous Saturday.

‘Ronaldo has scored three very important goals for us. We should control the game more against Norwich at home but it is a massive win for us.

‘We still have a chance to finish top four and we will fight for it until the last second.’

Those fans who delayed their arrival to demonstrate in the concourses around Old Trafford missed a riproaring start.

But United roared back with Anthony Elanga and Cristiano Ronaldo going close before they combined to score after seven minutes.

Elanga harried Ben Gibson on the edge of the penalty area and robbed the defender of the ball before instantly crossing for Ronaldo.

From the edge of the box, the veteran finished emphatically from 18 yards before beckoning the young Swede to join in his celebration by the corner.

Interestingly, the goal only heightened the strength of feeling against the owners. “Stand up if you hate Glazers” and “We want Glazers out” was the cry.

Some fans entered the ground after 17 minutes, marking the 17-year reign of the Americans.

United should have killed the game off. Jesse Lingard in only his third Premier League start of the season was denied by Tim Krul but the home side scored from the resulting corner in any case.

Alex Telles, deputising for the injured Luke Shaw, produced a perfect outswinger for Ronaldo to hang in the air and power in a header for 2-0.

As good as United were going forward, there were alarming gaps at the back.

Harry Maguire needed a block to stop Pierre Lees-Melou from scoring and just as they were looking forward to a half-time cuppa, they allowed a Norwich goal. 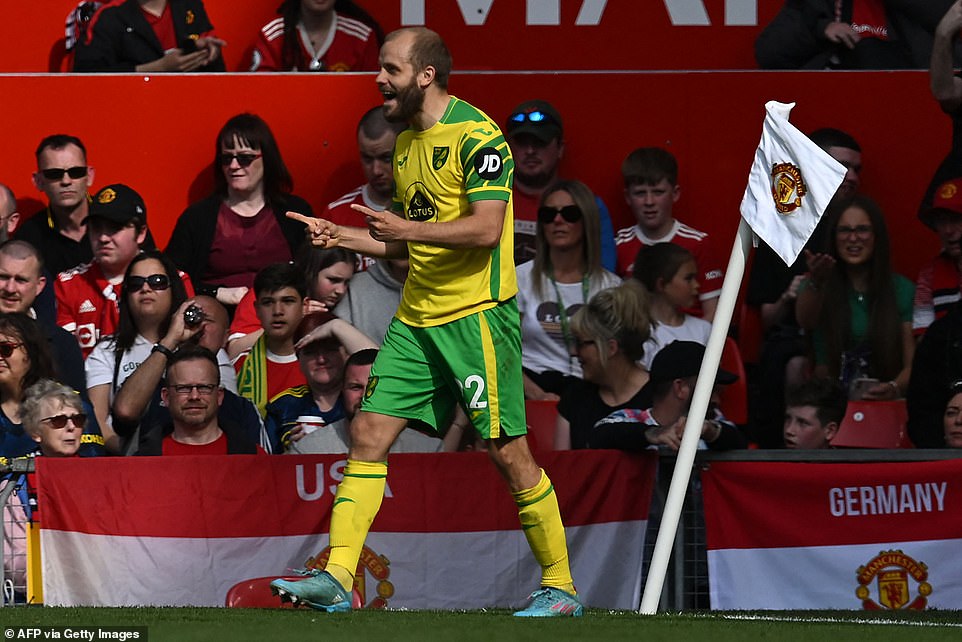 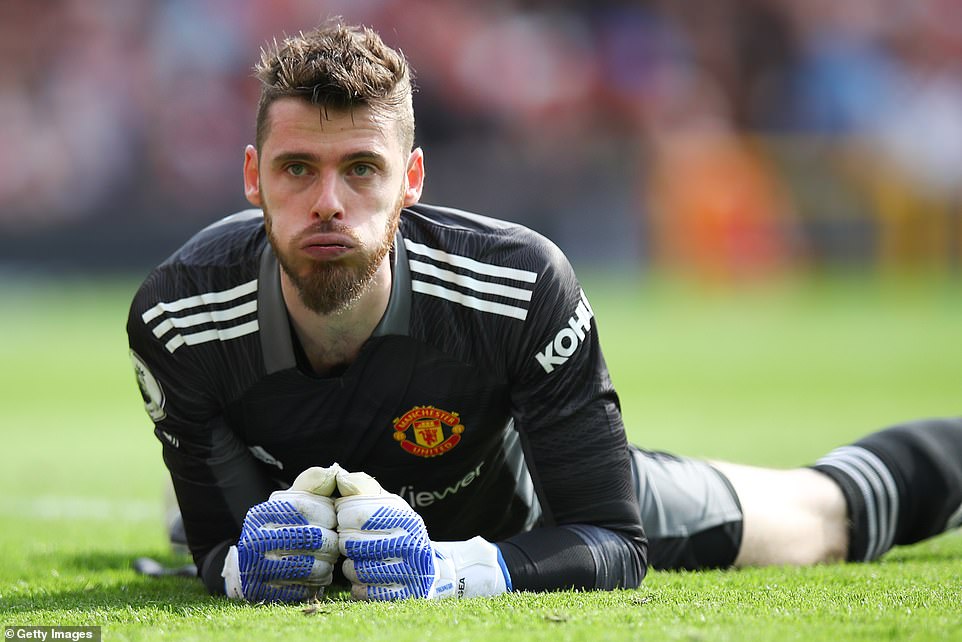 Diogo Dalot was beaten by Dimitris Giannoulis who fed Pukki. The Finn is best known as a goalscorer but on this occasion he dinked a cross to the far post where Kieran Dowell was unmarked to head in.

But the spaces in their back line returned to haunt them for Norwich’s equaliser after 52 minutes.

Dowell had time to put his head up and thread a pass through to Pukki who had just kept himself onside.

The striker had a clear run on goal and his finish past De Gea at the Spaniard’s near post was emphatic.

The visitors were then unlucky not to go ahead with Milos Rashica’s strike heading to the bottom corner until De Gea stuck out a long arm to divert for a corner.

United interim Ralf Rangnick belatedly shored up his side by sending on midfield holder Nemanja Matic for Lingard after 63 minutes.

There were boos and obscene chants aimed at Paul Pogba, who is out of contract in the summer and set to leave the club, when he trudged off a few minutes later to be replaced by Marcus Rashford. 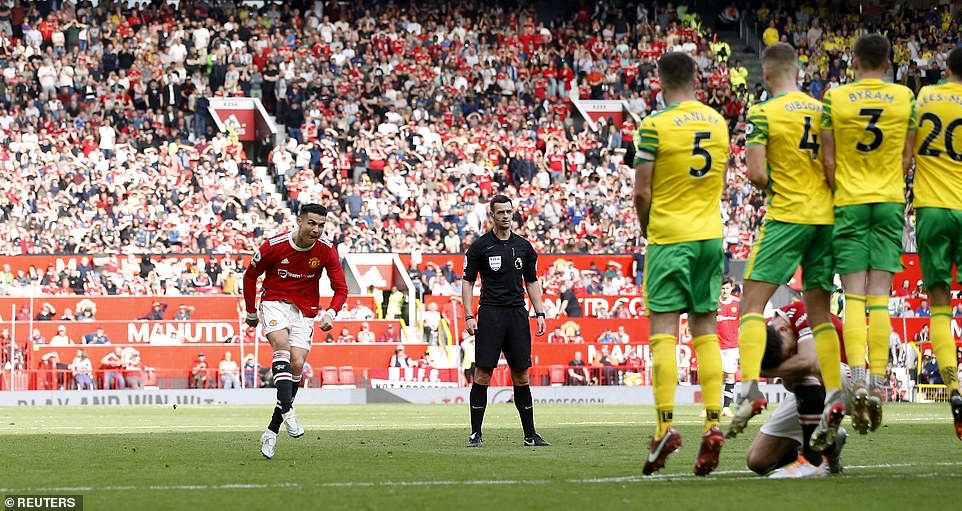 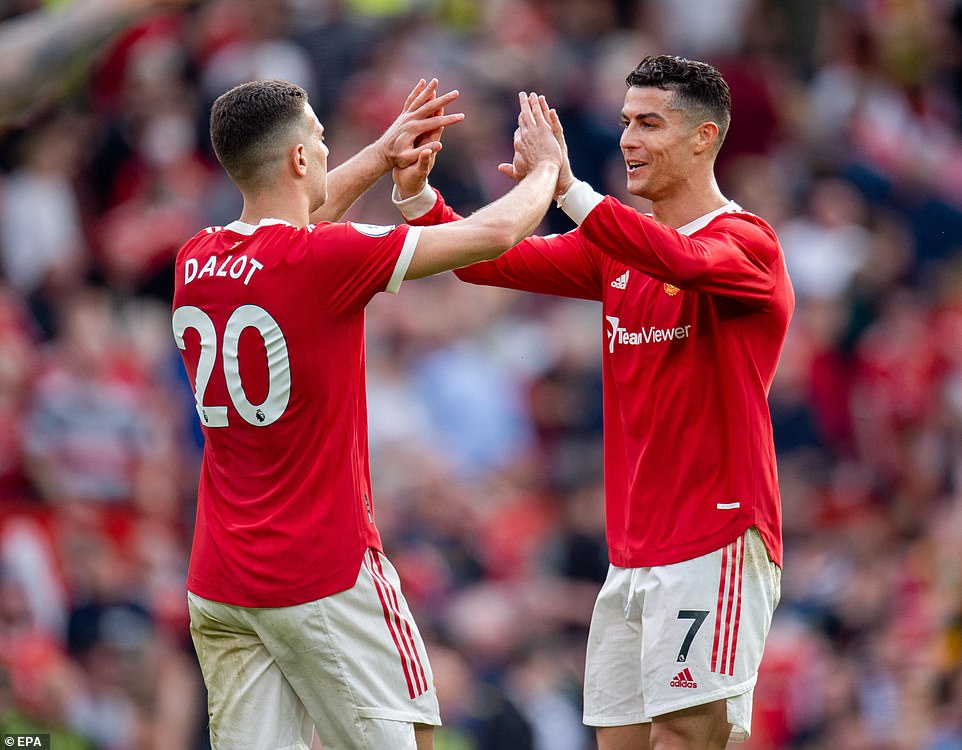 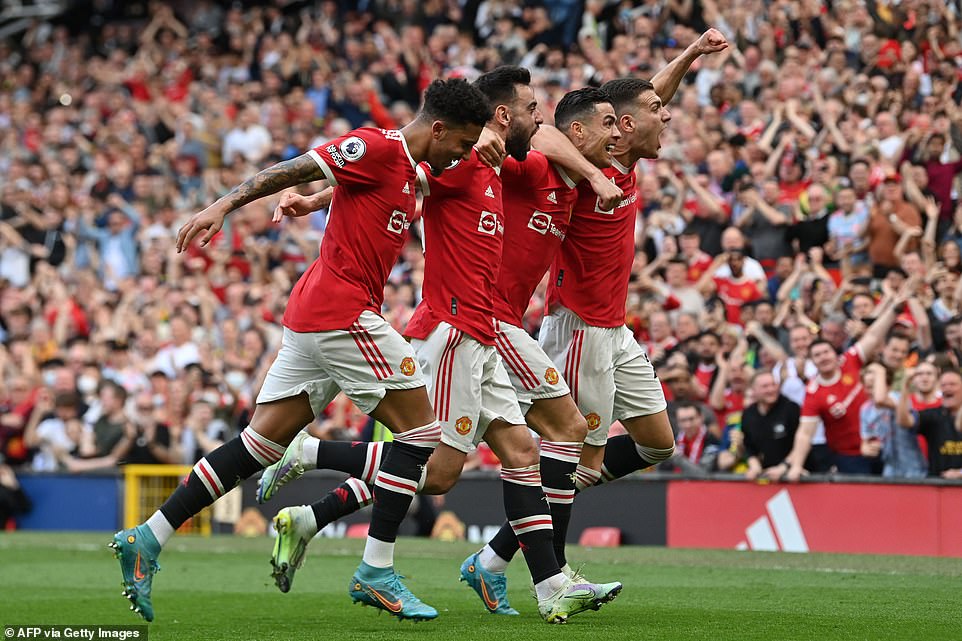 With United’s Champions League prospects flagging, there was one final great moment from Ronaldo.

When United won a free-kick outside the box, for a foul on Elanga, Juan Mata looked interested but there was only going to be one taker.

Ronaldo sized up the opportunity in his trademark stance and then thundered a shot that flew past Krul and bounced in via the inside of the post.

He has now scored trebles in consecutive Premier League games at Old Trafford and the fans temporarily forgot their hatred of The Glazers to celebrate.

Still, they know having Ronaldo on their side is only papering over some of the cracks. Norwich registered 14 shots on goal and United fans will be nervous heading to Anfield on Tuesday night.

Canaries goalscorer Dowell, whose side remain seven points from safety, admitted: ‘We missed some changes – and Cristiano Ronaldo proved the difference.’

The bigger malaise that still exists at United illustrated at the final whistle when Pogba sarcastically cupped his ear towards the fans who had been giving him grief.

Here is Sportsmail’s live blog for updates on this afternoon’s Premier League fixtures, with Manchester United and Arsenal both in action.